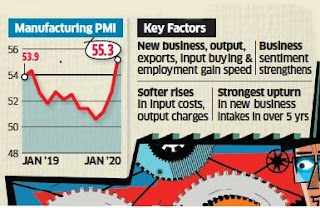 India’s manufacturing activity expanded at its quickest pace in nearly eight years in January on sharp rises in new business and production that gave employment a boost. Jobs grew at the quickest rate in close to seven-and-a-half years.

The IHS Markit India Manufacturing Purchasing Managers’ Index jumped to 55.3 in January from 52.7 in December. It was the highest reading since February 2012 and above the 50 mark that separates growth from contraction for the 30th straight month.

India’s FY21 nominal growth was pegged at 10% in the budget while the Economic Survey estimated real economic growth at 6-6.5%. The statistics office has lowered the FY19 GDP growth rate to 6.1% from the provisional estimate of 6.8%.

The PMI data was released a day before the Reserve Bank of India monetary policy committee begins its review. The central bank has kept rates unchanged over inflation concerns amid the growth slowdown. The monetary policy statement is scheduled to be made on February 6.

PMI is based on a survey of purchasing executives in more than 400 companies, which are divided into eight broad categories — basic metals, chemicals & plastics, electrical & optical, food and drink, mechanical engineering, textiles & clothing, timber & paper, and transport. It is a weighted average of new orders (30%), output (25%), employment (20%), suppliers’ delivery times (15%) and stocks of purchases (10%). The consumer goods sub-sector remained the brightest spot, although growth was sustained in intermediate goods and capital goods moved back into expansion. The rise in total sales was supported by strengthening demand from external markets, as noted by the fastest increase in new export orders since November 2018. Manufacturers particularly noted higher sales to clients in Asia, Europe and North America, with favourable exchange rates assisting the upturn.

“PMI is one kind of an indicator of manufacturing but it has no positive link with IIP (index of industrial production), which is production based,” CARE Ratings chief economist Madan Sabnavis pointed out. “Its sample is too small and it is a volatile index. Also, there is no substantial reason for companies to hire in January. So, one needs to wait and watch before drawing any conclusion on the manufacturing strength of the economy.”

As per the survey report, business sentiment strengthened and there were softer rises in both input costs and output charges.

Respondents noted the strongest upturn in new business intakes for over five years, which they attributed to better underlying demand and greater client requirements. A number of firms also suggested that marketing efforts bore fruit. As per the survey report, Indian manufacturers were more upbeat about the year-ahead outlook for production. Optimism stemmed from forecasts of better demand, new client wins, marketing efforts, capacity expansion and new product releases. 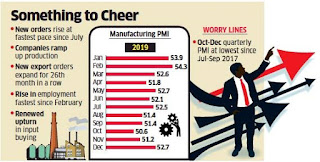 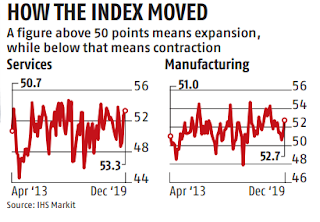