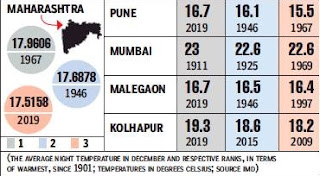 An India Meteorological Department winter analysis has revealed that December last year had the warmest night temperatures since 1901 in at least five cities in Maharashtra — Pune, Ratnagiri, Malegaon, Kolhapur and Dahanu.

The December 2019 nights were the fourth warmest for Mumbai in the IMD’s recorded history (1901) and second warmest for Aurangabad and Solapur. The data revealed that the average night temperature in Maharashtra was the highest after 1967.

Srivastava said to have such warm night temperatures during winter was rare but not incredible, considering the larger climate change and global warming scenario.

This winter, the anti-cyclones from the Arabian Sea were constantly blocking the flow of cold and dry northerly winds originating from the snow-clad regions of the Himalayas. While these winds could enter north India, their entry to south peninsular India, including Maharashtra, was blocked.

The wind regime was also such that the moist westerlies from the Arabian Sea or warm and humid easterlies were influencing the minimum temperatures in Maharashtra during most of winter. “As far as the high night temperatures witnessed this winter in many cities of Maharashtra and south India are concerned, there was an influence of local factors like soil topography and vegetation that also played a role in pushing up minimum temperatures in those stations,” Srivastava said.