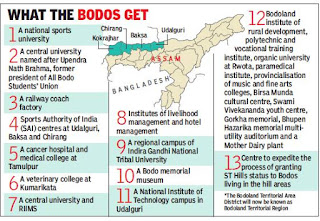 A tripartite accord signed between the Centre, Assam government and Bodo representatives, including all factions of the National Democratic Front of Bodoland that has waged a violent struggle, holds out prospects for peace with all the sides reaffirming their faith in the state’s territorial integrity.

The pact, described as “historic” by PM Modi, provides for setting up of a commission to reconstitute the Bodo Territorial Areas District by including new Bodo-dominated villages contiguous to the existing BTAD area and excluding villages with a predominantly non-tribal population. The BTAD will be rechristened as Bodo Territorial Region. Also, Bodo language will be notified as an associate official language in Assam.

Over 1,500 NDFB cadres will shun the path of violence, surrender their arms coinciding with Mahatma Gandhi’s death anniversary on January 30 and disband their armed outfits within a month. A Rs 5-lakh compensation is being offered to the families of Bodo rebels killed in their violent struggle. The surrendered cadres, too, will get a rehabilitation package. This is the third Bodo agreement to date, but seen as viable due to armed factions agreeing to be party to the settlement.

Cases against NDFB cadres involving non-heinous crimes will be withdrawn by Assam, while those involving more serious offences will be reviewed on a case-to-case basis. The number of assembly seats in BTC will go up to 60 from 40, though only from 2026 assembly polls.

It has been agreed that a Rs.1,500-crore economic package shall be released over the next three years for Bodo areas, with the Centre and the Assam government contributing equal measure. Deputy commissioners and SPs of districts within BTAD will be posted in consultation with BTAD chief executive member.