25% of government waterbodies in 5 states have dried up: Study 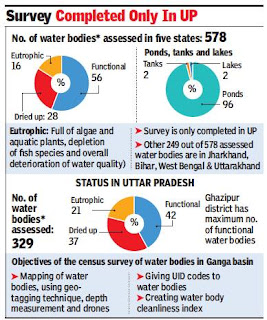 More than one-fourth of government owned waterbodies in the Ganga basin across five states are dried up, shows preliminary findings of the census survey of ponds, tanks and lakes in the river basin. The census is being conducted by the Quality Council of India, an autonomous body set up by the ministry of commerce and industry, with the objective of 100% mapping of all such waterbodies in Ganga districts for their improvement or rejuvenation.

The QCI has, so far, assessed 578 waterbodies covering all 329 in Uttar Pradesh. A total of 411 out of 578 surveyed water bodies are surrounded by settlements. The survey, being done under the ‘Namami Gange’ (Ganga Rejuvenation) programme of the Centre, is not yet completed in Uttarakhand, Bihar, Jharkhand and West Bengal.

In UP where the survey is complete, 37% of waterbodies are dried up while 21% have become eutrophic (characterised by excessive plant and algal growth) and only remaining 42% are fully functional.

“Encroachment and use of waterbodies for dumping solid waste could be the reasons behind their drying up There should be a separate authority to take care of ponds and other such waterbodies. Currently, many ponds and tanks exist only in revenue records,” said , environmentalist Vikrant Tongad who has been working on reviving waterbodies for long.

He said the finding of the survey of waterbodies in UP was shocking. “Mapping of waterbodies is a welcome step. It will give us an idea of what went wrong in the past threefour decades and how should we go about rejuvenating them,” said Tongad, founder of Social Action for Forest & Environment.

One of the key objectives of the survey is to map waterbodies, using geo-tagging techniques, depth measurement and drones. All waterbodies will also be given an unique identification codes. A cleanliness index will also be prepared, using parameters such as encroachment, quality and functionality of the catchment area. The QCI was to start the survey in March last year, but it started in November due to Covid-19.