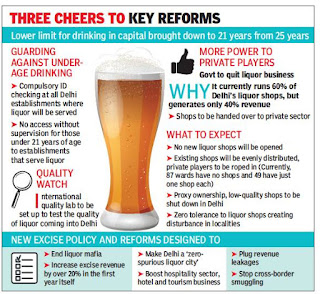 Delhi has lowered the minimum age for consumption of liquor to 21 years, from 25, in sync with the age set by neighbouring Uttar Pradesh.

The National Capital will also introduce the concept of age gating — debarring any person below 21 years of age and without adult supervision from a restaurant serving liquor.

The measures are part of an excise policy the Delhi cabinet approved on Monday. Under it, the government will not give permission to open any more liquor outlets. It will also withdraw from the liquor retail business, and allow private players to run vends, a decision that deputy chief minister Manish Sisodia said would increase Delhi’s revenue by ₹1,500-2,000 crore a year.

Addressing a press conference, Sisodia said, “To stop harassment of people and establishments, consumption age will be the same as a majority of Indian states — at 21, like Noida in Uttar Pradesh. New rules will be introduced to make sure that people who are under the age of 21 cannot get access to the establishment that serves liquor, without supervision.” He said Delhi would be the first city in India to introduce the concept of age gating. So far, people under the legal age were not served alcohol, but were allowed to enter such restaurants without adult supervision.

The minister said age gating would help ensure there was no underage drinking in Delhi. The standard operating procedure for this will be created in consultation with the industry, he said