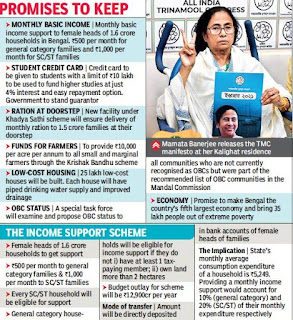 A basic income scheme for economically disadvantaged families of Bengal — while attempting to make women heads of families more financially stable — was the headliner of the Trinamool Congress’s “development-oriented” manifesto that party chief Mamata Banerjee released in Kolkata on Wednesday.

Banerjee also targeted first time voters and the farming community: the former through a “student credit card” scheme, which would enable them to use up to Rs 10 lakh for higher studies at just 4% interest, in which the government would act as a guarantor; and the latter by doubling the Krishak Bandhu direct cash transfer amount to Rs.10,000 per year.

Banerjee declared that women heads of 1.6 crore households in Bengal would receive the basic income benefit. “Female heads of general category families will be provided Rs 500 monthly and SC, ST and families of other backward classes Rs 1,000 per month,” she said, releasing the manifesto at her Kalighat home, which also serves at the party HQ. The manifesto mentions that this would cost the exchequer approximately Rs12,900 crore per year.

According to the 2011 census, Bengal’s 9.1 crore people live in around two crore households. While the scheme would include every household from the SC and ST community, for the general category, this income support would be given to all households, except “those having at least one tax-paying member (which translates to 42.3 lakh households) and those owning more than two hectares land (2.8 lakh households)”. Bengal’s monthly average consumption expenditure of a household is Rs 5,249. “Providing this monthly income support would account for 10% and 20% of their monthly expenditure respectively,” the manifesto mentions, adding that the amount would be directly deposited into bank accounts.

“The move is aimed to financially empower women heads in families,” Banerjee said, adding, “The name of the scheme will be decided later.”

My mothers and sisters will get some money in hand to choose what they do for the family,” CM Mamata Banerjee said. According to the Election Commission’s final electoral roll data for the 2021 assembly polls in Bengal, 49% of Bengal’s 7.3 crore voters are women.

The Trinamool Congress manifesto declared that if voted to office, a “student credit card” of Rs 10 lakh, with a 4% rate of interest, would be provided to youngsters for higher studies, in which the government will act as guarantor. According to sources, education loans have a morethan 10% interest rate. “Unlike a loan that is drawn as a lump sum, a student credit card will provide money to students on demand at their convenience, benefiting more than 1.5 crore students over the next five years,” says the manifesto.

Khadya Sathi (the ration-for-all scheme), currently being implemented in Bengal, would now become a rationat-your-doorstep scheme. “The Duare Sarkar (government at your doorstep) programme will continue for four months a year, in August-September and December-January. The ration will be provided at your doorsteps,” she said. “The immediate target is to bring 35 lakh families out of extreme poverty.”

Upping the ante in the Centre-Bengal debate on PM Kisan and Krishak Bandhu direct cash transfer schemes, Banerjee said the state would double the Rs 5,000-per-annum benefit to Rs 10,000. PM-Kisan gives a Rs 6,000 benefit. “The crop insurance benefit and the Rs 2 lakh death compensation will also remain. Unlike the Central scheme, Krishak Bandhu covers marginal landowners, even those who have an acre of land or less,” she said. This is expected to benefit 68 lakh small and marginal farmers, according to the manifesto.

The CM also promised a special task force to examine and propose OBC status to all communities who are not currently recognised as such, but were part of the recommended OBC list in the Mandal Commission.