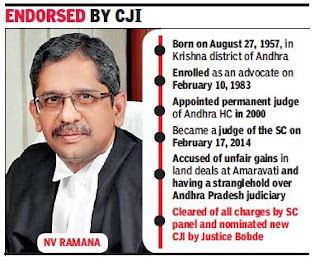 A month before his retirement, Chief Justice of India S A Bobde recommended senior-most Supreme Court judge Justice N V Ramana to the Centre as the next CJI. In the process, Bobde dismissed an unprecedented complaint against Ramana submitted by Andhra Pradesh chief minister Jaganmohan Reddy after an in-house inquiry held the accusation to be “false, frivolous, baseless, motivated” false and an attempt to “browbeat” the judiciary.

In his letter to Union law minister Ravi Shankar Prasad, Bobde said Ramana was eminently suitable and fit to be appointed the next CJI, the first from Andhra Pradesh and the second Telugu to head the country’s judiciary after K Subba Rao. Ramana will take oath as the 48th CJI on April 24.

It was learnt the CJI and two other senior judges examined Reddy’s complaint threadbare, the charges being two-fold — that Justice Ramana's two daughters had bought land in Amaravati, the proposed capital of Andhra Pradesh, for a song even before the notification for the future capital was issued, and that Justice Ramana had a stranglehold over the Andhra Pradesh judiciary which was passing adverse orders against the Reddy government.

The two judges gave lengthy written opinions on the complaint and termed the charges “false, frivolous, baseless, motivated" and said these were levelled to "browbeat the judge" who was heading a bench which had passed orders to expedite snail-paced criminal trials against sitting and former MPs/MLAs.

Documents perused showed that Justice Ramana's daughters, like many others, bought land in Amaravati area in June 2015 from a local property dealer more than a year after then Union minister Panabaka Lakshmi in February 2014 announced Amaravati as the new capital.

When he takes oath, Justice Ramana will be the second Telugu to head the judiciary. The figures of Justices Rao and Ramana are a contrast. Justice Rao was born in a wealthy advocate family and his father-in-law was a judge of Madras HC. Rao enrolled as an advocate in Madras HC in 1926 and was appointed as its judge in March 1948. After Andhra Pradesh was formed, Justice Rao was appointed its chief justice in July 1954. He was appointed to the SC in January 1958 and became CJI on June 30, 1966.