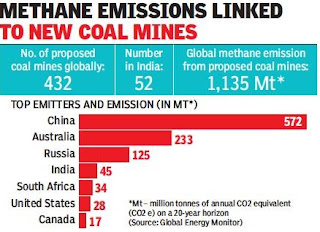 India may continue to depend on its coal mines for a couple of more decades to meet its growing energy requirement but the country would still not be close to the top methane emitters among coal users such as China, Australia and Russia. India will, in fact, not emit even one-tenth of what the world’s biggest polluter China would be emitting during a 20 year period.

Globally, all 432 proposed coal mines would emit 1,135 million tonnes of annual CO2-equivalent on a 20-year horizon. Methane is the second biggest contributor to global warming after CO2, with a shorter atmospheric lifetime, but much stronger potency and warming potential.

“Coal mine methane has dodged scrutiny for years even though there is clear evidence it poses a significant climate impact. If new coal mines proceed as planned, without mitigation measures in place, then a major source of GHG will go unrestrained,” said Ryan Driskell Tate, a research analyst at Global Energy Monitor and author of the study.The countries with the highest amount of methane emissions from proposed coal mines are China (572 Mt), Australia (233 Mt), Russia (125 Mt), India (45 Mt), South Africa (34 Mt), the US (28 Mt), and Canada (17 Mt).

According to the Global Coal Mine Tracker which has estimated emissions at major operating mines, the world’s leading emitters are located in China, with major mines in Shanxi province releasing the most methane. Outside of China, gassy coal mines are operating in Poland, Indonesia, the US, Russia, Kazakhstan, and Australia.