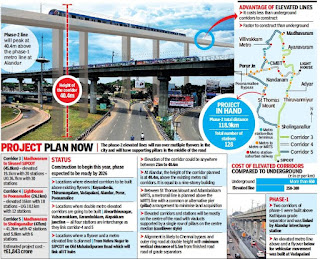 The metro is changing not just the city’s commute, but its skyline too. Imagine a metro line at a height of 40.4 metres, as tall as a nine-storeyed building. That’s the height of the phase-2 line planned at Alandur, which will run above the existing phase 1 line.

For the 118.9 km phase-2, CMRL has decided to go over rather than under. Metro lines will soar over the Kathipara flyover in Guindy, the grade separator at Koyambedu, and flyovers at Vadapalani, Thirumangalam, Porur and Poonamallee. A 21km line between Nehru Park and SIPCOT on Old Mahabalipuram Road is also expected to come up above a yet-to-be-built flyover. The height will range from 23 metres to 36 metres.

The new skyline, however, comes at a cost. “It will cost roughly 10% to 20% more than an elevated line above a road because the quantity of construction material needed will increase,” said V Somasundaram, former CMRL official.

For instance, while elevated viaducts on a road are built at an average 12m height, which includes clearance for the vehicles on the road for about 5.5m, when they built above a flyover, which may be at 6 to 7m height, the height of these viaducts may be at 18 to 20m. “Usually, the line slowly starts rising at least half a kilometre away from the maximum elevation. After crossing the flyover, it will start descending gradually to a height of 11m to 12m. For every 25m, there may be a 1m elevation,” explained Somasundaram. “It is still technically feasible and faster than going underground,” he added.

Unlike phase-1, the elevated corridors and stations are going to be built in cantilever style, where the structure sits on a single row of pillars raised on the centre of the road while the trimmed down stations will have two arms, which will be entry points, spreading out to either side of the road.

CMRL is equipped with information on all the flyovers over or under which they may be building a line. A city corporation official said they have given technical details of flyovers at Kodambakkam, Bazullah Road in T Nagar and at Radhakrishnan Salai. “We had a series of meetings with CMRL officials on constructing above our flyovers. Permission to construct above our flyovers was given only with an assurance from them that there will be no disturbance to traffic and no damage to our structures,” a state highways official said.

We had a series of meetings with CMRL officials on constructing above our flyovers. Permission to construct above our flyovers was given only with an assurance from them that there will be no disturbance to traffic and no damage to our structures