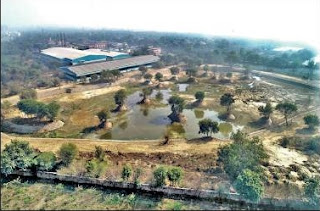 Dwarka has a new waterbody, complete with wooded islands. While it may not be fully filled with water, the newly created 7-acre pond in Sector 16, Dwarka, will soon present a better view. From Saturday, the amount of treated water sourced from Pappankalan sewage treatment plant being fed into the lake was increased from five million litres a day to 10 million litres.

Built under the “City of Lakes” project by Delhi Jal Board aimed at rejuvenating waterbodies in the capital, the new lake is spread across 28,000 sq metres and will recharge the subsurface aquifers with more than five million litres of water every day. Ankit Srivastava, technical advisor to DJB, said the lake cost Rs.2.5 crore to build.

Srivastava said the whole exercise was completed in just seven months. Explaining how the lake water is of good quality, he said, “The water from the treatment plant is passed through a tertiary filter and nutrient filter. The quality of water is much better and has a higher ratio of biological oxygen demand to total suspended solids,” he said. Some other lake rejuvenation projects are in advanced stages at Rohini and Timarpur, Srivastava added.

The lake site is located within the premises of the sewage treatment plant and will not be open to the public for recreational use. Srivastava said that the lake would instead serve multiple purposes besides recharging the groundwater in an area where the levels have gone down to 12-15 metres.

A DJB official said that in future the possibility of groundwater extraction could be explored if it reached a sufficiently high level. “Tubewells may also be installed because several education institutions and the Law University are located nearby. Groundwater extraction for institutional use can be explored once the levels rise to above 7-8 metres,” the official said.

The official explained that the lake could also act as a polishing unit for further purifying the water.

The 155 waterbodies being rejuvenated fall in 14 groups, with the first phase ones expected to be completed by June, DJB had earlier informed the monitoring committee. Another 42 ponds and lakes are to be revived by January 2022, while the rest are expected to be finished by December next year. The frequently cited reasons behind delays in completion include budgetary constraints due to the pandemic, the lockdown, election model code of conduct and, in some cases, local resistance.