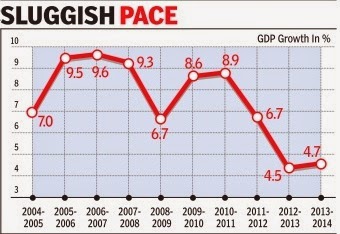 The country's economy expanded by 4.7% in 2013-14, the second successive year of sub 5% growth hurt by policy delays, high inflation and the global slowdown but the election of a new government has triggered hopes of a revival in growth and sentiment in the months ahead.
Data released by the Central Statistics Office (CSO) showed the economy grew by 4.7% in 2013-14, shade below the original estimate of 4.9% but slightly above the 4.5% growth in 2012-13.
The economy expanded by 4.6% in the fourth quarter of 2013-14 compared with a similar growth in the previous quarter. The economy posting two consecutive years of below 5% growth is the worst performance of Asia's third-largest economy in over two decades.
Growth in 2013-14 was helped by a smart rebound in the farm sector which grew an annual 4.7% compared with a 4.5% expansion in the year earlier period. The electricity sector also posted a healthy growth rising an annual 5.9% in 2013-14 compared with a 2.3% growth in 2012-13.
The manufacturing sector continued to remain under stress, declining 0.7% year-on year in 2013-14 compared with 1.1% growth in 2012-13. The mining sector, which has borne the brunt of policy delays, fell 1.4% year-on-year in 2013-14 compared with a decline of an annual 2.2% in the year earlier period.
Economists said they expect the economy to rebound due to the optimism generated by the Narendra Modi government and the approvals to stalled projects. “In 2014-15, under the assumption of normal monsoon, we expect GDP growth to rise to 6%,“ ratings agency Crisil said “But if monsoons fail -the Indian Meteorological Department has assigned 60% chance of El Nino phenomenon occurring this year -GDP growth could be lower, at 5.2%,“ the agency said in a statement. The fiscal deficit in 2013-14 stood at 4.5% of GDP, lower than 4.6% projected in the revised estimate, mainly on account of curbs on government expenditure. The fiscal deficit, the gap between government's expenditure and revenue, in actual terms was Rs 5.08 lakh crore as against 5.24 lakh crore projected in the revised estimate. 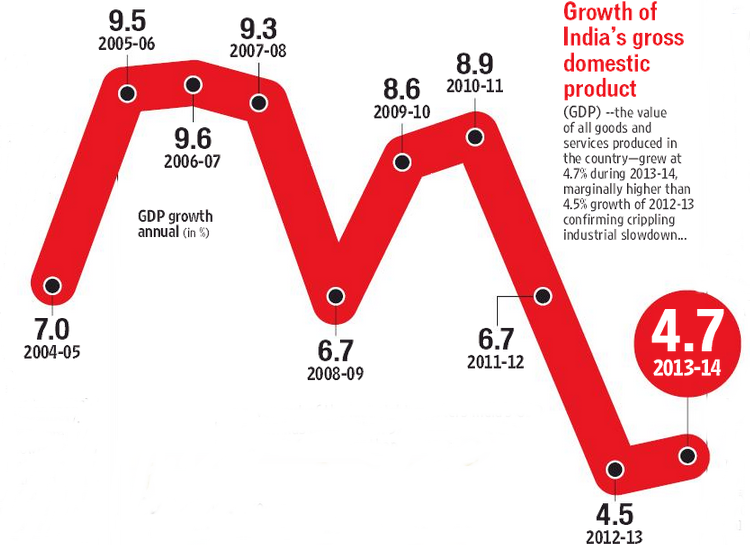 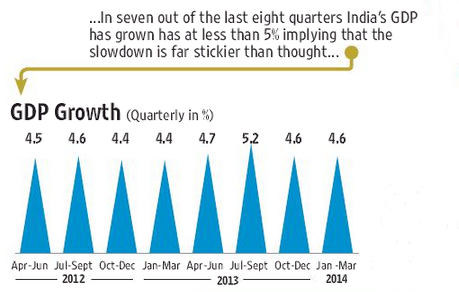 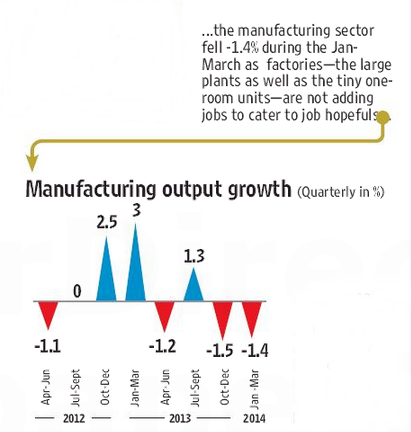 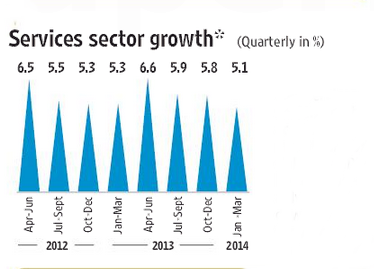 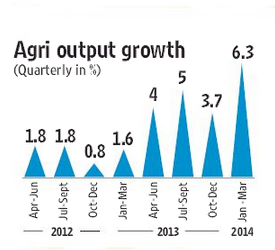