The Bharatiya Janata Party -led National Democratic Alliance is set to improve its tally in the Rajya Sabha, winning 28 of the 59 seats that went to polls this year.

Rajya Sabha election results declared Friday showed that the BJP won nine of the 10 seats in Uttar Pradesh, and one each in Karnataka, Jharkhand and Chhattisgarh.

While 33 Rajya Sabha seats witnessed no election, 26 went to polls on Friday. Of the 33 elected unopposed, 16 were from the BJP, three from its allies and five from the Congress, among others.

The Rajya Sabha election results showed that incumbent regional parties in states such as West Bengal and Telangana continue to perform well.

The BJP’s performance ensures that its dominance as the largest party in the Upper House continues, though the NDA is still short of a majority.

The biggest loser from Uttar Pradesh is the Samajwadi Party, which had six out of the 10 Rajya Sabha seats that went to polls. It retained only one seat, that of Jaya Bachchan.

The BJP won a historic mandate in the Uttar Pradesh elections last year—giving it an edge in the Rajya Sabha elections this year. The party’s gains come at the cost of the Akhilesh Yadav-led SP, which was voted out of power last year.

Union finance minister Arun Jaitley is among the BJP candidates who has entered the Upper House from Uttar Pradesh.

The counting of votes was delayed in Uttar Pradesh, Jharkhand and Karnataka following complaints by members from different political parties.

In West Bengal, the chief minister Mamata Banerjee-led Trinamool Congress maintained its tally by retaining four seats. In the fifth, Congress’ Abhishek Manu Singhvi won. The Communist Party of India (Marxist), or CPM, lost out on one seat that it held earlier.

In Telangana, the ruling Telangana Rashtra Samithi won all three Rajya Sabha seats without any hitch. Its winning candidates were Banda Prakash, Lingaiah Yadav and Santosh Kumar. The Congress lost out on two seats which it held earlier.

The BJP maintained status quo in the one seat that went to polls in Chhattisgarh. The party’s national general secretary, Saroj Pandey, defeated the Congress’s Lekhram Sahu.

In Kerala, leader of Sharad Yadav-led Janata Dal (United) splinter faction, M.P. Veerendra Kumar, won with 89 votes. He was supported by the Left Democratic Front, which has 91 seats in the 140-member state assembly.

The lone seat had fallen vacant because of Kumar’s resignation from the Rajya Sabha in December, in protest against JD(U) chief and Bihar chief minister Nitish Kumar joining ranks with the NDA.

Six members of Kerala Congress (Mani) abstained from voting. The lone BJP member, O. Rajagopal, and independent member P.C. George also abstained. One member of the Indian Union Muslim League could not vote due to ill-health. 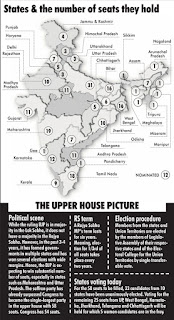 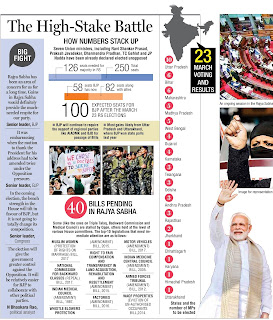 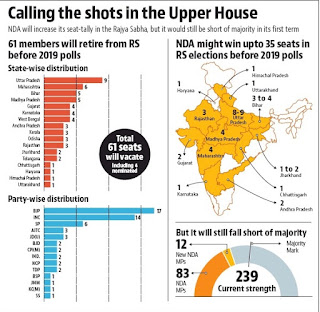