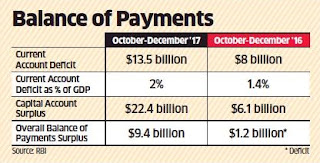 India’s current account deficit, the excess of imports of goods and services over their exports, widened to 2% of GDP in the third quarter as oil prices rose and inbound shipments of electronics surged, likely dealing a blow to an already weakening rupee.

The data showed the CAD widened due to a higher trade deficit of $44.1 billion on account of an increase in merchandise imports, mainly crude oil and other petroleum products, which accounted for more than 40% of India’s overall merchandise import bill. Crude oil prices have risen by over $10 a barrel between December 2016 and December 2017. Of late, there has been a surge in electronics imports as well.

Net services receipts increased by 17.8% from a year earlier on the back of a rise in earnings from software services and travel receipts. Private transfer receipts, mainly representing remittances by Indians employed overseas, amounted to $17.6 billion, an increase of 16%.