Exports Growth Dips to 4.48% in February 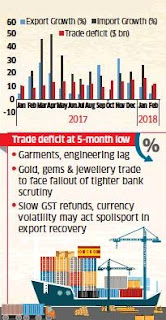 India’s merchandise exports growth slowed to 4.48% in February from 9.06% the previous month, hit by a fall in shipments of engineering goods, ready-made garments and gems and jewellery.

However, the trade deficit narrowed to $12 billion, a five-month low, as imports growth too slowed at 10.4% compared with 26% in January. Imports of gold and transport equipment shrank last month.

However, industry was disappointed by this meagre increase in exports. EEPC India chairman Ravi Sehgal said it was disconcerting to see Indian exports faltering when the global economy was on an uptick.

In comparison to India’s exports, China’s shipments rose a whopping 44.5% in February, the strongest in three years.

With a high 20.4% expansion in services exports outpacing the 17.1% growth in services imports, the services surplus rose to a 25-month high of $6.5 billion in January 2018.