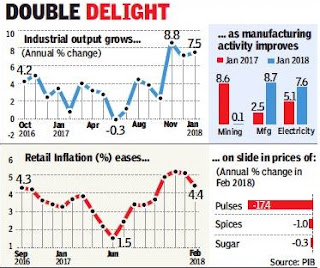 Retail inflation cooled for the second consecutive month in February on the back of moderating food prices, while industrial output continued with its strong run in January, bringing a cheer for policymakers battling to fast-track growth and tame price pressures.

Retail inflation, as measured by the consumer price index, rose an annual 4.4% in February, slower than previous month’s 5.1%. Food prices softened during the month, with the index rising 3.3% in February, slower than previous month’s 4.7%. Economists said they expect the RBI to hold rates for now and the central bank may not turn hawkish in its April review.

Separate data showed industrial output growth rose an annual 7.5% in January, the second successive month of robust growth after December’s 7.1% rise, and above the 3.5% posted in the same month last year. Cumulative growth between April and January was 4.1%, slower than the 5% posted in the year-earlier period.

Economists said the factory output data showed that the impact of disruptions caused by the roll-out glitches of the GST and demonetisation had diminished.