At 3.6%, industrial production rises to eight-month high in October 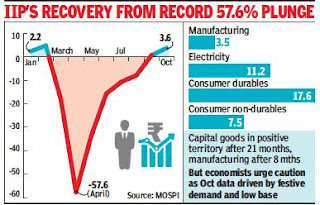 Registering growth for the second straight month, industrial production rose to a eight-month high of 3.6 per cent in October on the back of recovery in manufacturing, consumer goods and power sectors.

The manufacturing sector, which has a weightage of 77.6 per cent in the IIP, recorded a growth of 3.5 per cent in October. In the year-ago period, the sector had a contraction of 5.7 per cent, according to data released by National Statistical Office.

As per the use-based classification, the consumer durables segment, which mainly includes white goods, posted an impressive growth of 17.6 per cent in October whereas it was a contraction of 18.9 per cent in the same period a year ago.

Electricity generation sector recorded an impressive growth of 11.2 per cent in October while output of mining sector contracted by 1.5 per cent during the same period.

The IIP had contracted by 6.6 per cent in October 2019. The industrial production witnessed a 5.2 per cent growth in February. Thereafter, it entered the negative territory in March and remained in the contraction zone till August. In September, there was a marginal growth of 0.5 per cent.

On March 25, the government had imposed a lockdown to contain the spread of Covid-19 infections and that had also disrupted economic activities. However, with the gradual relaxation of restrictions, there has been relative improvement in the economic activities. Rating agency Icra's Principal Economist Aditi Nayar said that while the IIP growth stood at an eight month-high and displayed its best performance since the pandemic struck, the pace of the improvement in October 2020 was feebler than expected. 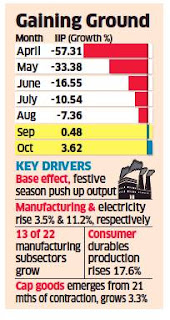