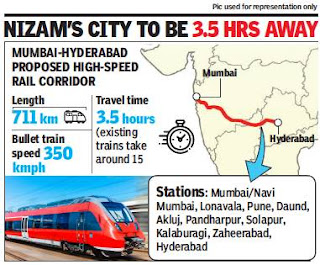 The terminal for the Mumbai-Hyderabad bullet train corridor may come up in Navi Mumbai, which will have an integration with the under-construction international airport, besides connectivity to the Mumbai Trans Harbour Link, work on which is going on.

With the average speed of the proposed bullet train estimated at 320 km per hour, the 711-km distance between Hyderabad and Mumbai can be traversed in less than three-and-a-half hours.

This distance now takes over 15 hours by existing trains, that run at speeds between 80 km per hour and 120 km per hour, with many stops in between the two cities. A fast train between Mumbai and Hyderabad is Hussain Sagar Express that takes under 14 hours.

This will be the third highspeed rail project involving Mumbai. At present, the implementing agency, National High Speed Rail Corporation is tasked with the 508 km Mumbai-Ahmedabad High Speed Rail Link project. The other Mumbai project is the proposed 753 Km Mumbai-Nashik-Nagpur corridor.

A senior railway official said, “Space is a problem in Mumbai and hence we are looking at Navi Mumbai for the terminal station for the Mumbai-Hyderabad corridor. Even there land may not be a problem as we can plan an underground station on airport land. A final decision is yet to be taken.”

But a problem is that the state government has not shown any zeal in acquiring land for the section of the corridor which falls in Maharashtra.

An official said, “What one needs to understand is that the Mumbai-Hyderabad project may not face much of a hurdle as it offers connectivity to important stations in Maharashtra like Lonavla, Pune, Pandharpur and even Solapur. The main grouse of the Mumbai-Ahmedabad bullet train corridor is that it offers connectivity between the major cities of Gujarat compared to Maharashtra.” A major portion of the corridor, 349 km of the total 508 km, falls in Gujarat.