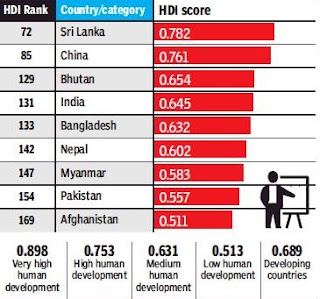 India ranked 131 out of 189 countries in the UNDP’s Human Development Index for 2019, down one step from rank 130 in the previous year. The just released Human Development Report 2020 showed that while India’s HDI score of 0.645 had inched up marginally from 0.642 in 2018, it was still lower than the average for developing countries of 0.689.

The HDI, which completes 30 years, seeks to present a composite measure of where countries stand on three broad fronts — health, education and economic well-being — using life expectancy, expected and mean years of schooling and per capita gross national income as proxies for these three.

In 2019, India ranked 133rd on life expectancy at birth, 125th on expected years of schooling, 162nd on mean years of schooling and 126th on GNI per capita, suggesting that its human development indicators are worse than mere economic factors would warrant.

Over the last couple of years, the improvement has been even slower, by 0.3% in 2018 and 0.5% in 2019. While improvements in scores are likely to slow down as the scores increase, India is hardly at a level where that should be happening, still being classified in the “medium human development category”. Norway continues to be at the top of the HDI rankings with Ireland, Switzerland, Hong Kong and Iceland rounding off the top 5. Germany, Sweden, Australia, the Netherlands and Denmark are the others in the top 10, an illustration of the extent to which Western Europe dominates the top of the list.