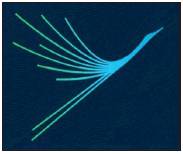 NCR’s second airport, coming up at Jewar in Greater Noida, will officially be known as Noida international Airport and will have as its constant companion a logo depicting a flying sarus crane, Uttar Pradesh’s state bird that has one of its richest habitats in the wetlands around Noida.

The decision was taken on Thursday after senior executives of Yamuna International Airport Private Limited, the subsidiary of concessionaire Zurich AG that has been formed to build and operate the new airport, and officials of the civil aviation department met chief minister Yogi Adityanath in Lucknow.

The design of the terminal building was also presented to the chief minister.

While the project has made significant headway with land acquisition complete and the handover of land to Zurich AG for the first phase likely by mid-2021, the airport came to be referred to in different ways in the absence of an official name. It was commonly referred to as Jewar airport. 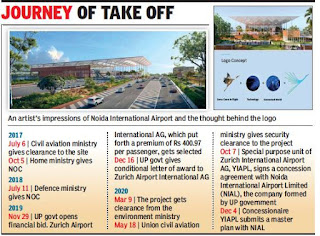 In the design sketches of the terminal buildings that were recently released, the project was referred to as Delhi Noida International Airport. Officials of Noida International Airport Ltd, the special purpose vehicle formed by the state government to oversee the airport project, objected to this and asked YIAPL to refrain from using a title till both sides had finalised a name.

NIAL CEO Arun Vir Singh said, “The final name Noida International Airport will be updated in the concession agreement and in all subsequent documents.”

The concept of the logo germinated from discussions on themes centred around the state bird. The designers arrived at the final logo by merging the motifs of a sarus (stork) in flight, technology and a connected world. The wings of the sarus in the logo, officials said, are meant to connote the idea of remaining connected with the rest of the world. “The logo also signifies a flight that is about to take off from the runway. The creative team deployed for the job by Zurich AG has done a splendid job by including all the elements in a simple design,” said Singh.

YIAPL CEO Christoph Schnellmann, COO Kiran Jain and senior executive Sunil Joshi were at the meeting with the CM. From the UP government, chief secretary RK Tiwari, additional chief secretary to the CM SP Goyal and director of civil aviation Surendra Singh were present. NIAL was represented by Arun Vir Singh and nodal officer Shailendra Bhatia.

The airport’s master plan, building design and airside activity are being scrutinised by the civil aviation regulator and approval is expected in January next year. According to conditions in the concession agreement, the UP government will execute the support agreement by April 5, 2021. For this, a letter has been sent to the concessionaire. Singh, the civil aviation director, said the department would complete the formalities by the end of this month.

Noida International Airport is also proposed to be linked to the high-speed rail project connecting Delhi with Varanasi. At the same time, RITES has conducted a study to connect it with IGI airport in Delhi. Plans are also afoot to link the airport with the proposed Delhi-Mumbai expressway.

Yogi said the Noida International Airport will give a boost to industrial development and lead to creation of jobs, promotion of exports, streamlining of air traffic, and more tourism activity. Terming the aviation sector as a medium of multi-dimensional growth, Yogi said it would also bolster the economic development of the state.