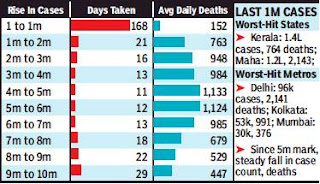 India on Friday became the second country after the US to log 1 crore (10 million) Covid cases even as the pandemic keeps receding in the country.

It took 29 days for cases in India to go from 9 million to 10 million, making it the slowest rise since the first million cases. Even average daily deaths in these 29 days were the lowest after the first one million.

India’s Covid numbers have been falling for three months now, ever since the caseload crossed five million on September 15. The total caseload crossed the grim 1 crore milestone after 27,022 fresh infections took the tally to 1,00,04,893 on Friday night.

Deaths per million in India stand at 104, the second lowest among the world’s 20 worst-hit countries. Only Indonesia, which is currently at number 20 in total caseload, has had fewer deaths per million at 71. In terms of daily cases, India hit its peak almost exactly three months ago on September 17, when 98,795 fresh infections were recorded in a single day. In these three months, cases have surged for a few weeks at a stretch in some states like Delhi but the overall trend has been of a steady decline despite the festive season and further relaxations in restrictions across states.

Some of the most dramatic decreases in cases were seen in the southern states. When India’s caseload hit nine million on November 19, the southern cases had a 37% share in the total tally. In the last one million cases, the south’s share had dropped to 27% despite numbers in Kerala continuing to remain relatively high. India remains one of only two nations among the 10 worst-hit countries of the world which is yet to see a second surge in cases. The other country is Argentina. The reason(s) why the country’s numbers have been consistently falling for three months now remain in the realm of speculation. 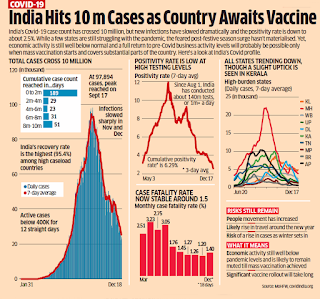