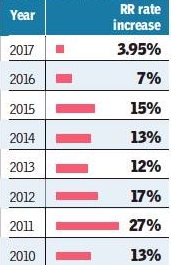 For the second consecutive fiscal, the Ready Reckoner rates in Maharashtra will remain unchanged in 2019-20.

Revenue department officials said the decision to keep the rates unchanged was taken at a meeting ahead of the announcement of the Lok Sabha election schedule on March 10 and implementation of the model code of conduct.

They said the decision was a regular procedure and would not come under the purview of the model code of conduct norms.

The meeting was attended by some key ministers and necessary instructions would be issued to the Inspectorate General of Registration and Stamps and the town planning department.

The RR rates are used by the government to assess market value of properties. Stamp duty and registration charges are also paid on the basis of the RR rates, which are revised on April 1 every year.

In 2017, the RR rates were increased by 3.9%. The authorities had cited the slowdown in the real estate sector for not increasing the rates in 2018-19.