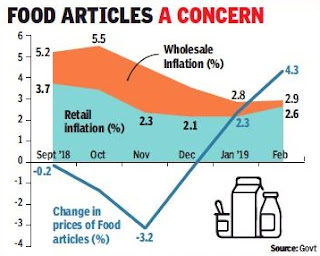 Surging food and fuel prices pushed wholesale prices higher in February but it still remained below the Reserve Bank of India’s comfort level, sustaining hopes of an interest rate cut when the central bank reviews monetary policy in April.

Inflation, measured by the wholesale price index, rose an annual 2.9% in February, marginally higher than previous month’s 2.8%. WPI inflation was 2.7% in the same month last year.

Data released earlier this week showed retail inflation rose to a four month high of 2.6% in February but remained below the RBI’s comfort zone, which led to hopes for a rate cut in April.