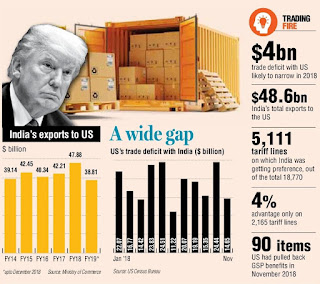 US President Donald Trump has announced that he is ending India’s $5.6 billion trade concessions under the Generalised System of Preferences programme, accusing New Delhi of not providing Washington “equitable and reasonable access” to its markets. India has said it will not have a significant impact on its export to America.

Downplaying the likely effects of the US withdrawal of benefits for Indian exports under the programme, Commerce Secretary Anup Wadhawan said the decision will not have any major impact on overall Indian exports to the US as the concessions availed under the scheme were “minimal”. The official said: “Total GSP benefits availed by India under the GSP programme were to the tune of $190 million on a trade $5.6 billion. So, the benefits both in an absolute sense, and as a percentage of the trade involved, are very minimal and moderate.”

Meanwhile, Trump said he will continue to monitor if India is “providing equitable and reasonable access to its markets” and meet the GSP eligibility criteria. The US Trade Representative said: “India has implemented a wide array of trade barriers that create serious negative effects on US commerce”, but did not mention the specifics in its statement.

In another development, sources said India may allow proposed retaliatory duties on 29 US imports that have been deferred six times to kick in from April 1 to express its displeasure, given that the two countries were in talks to resolve trade issues. These levies had been proposed in response to the US raising duties on steel and aluminium imports from India and other nations last year.

The US announcement came hours after President Donald Trump said India was a “tariff king” and imposed “tremendously high” tariffs on American products such as Harley-Davidson motorcycles.

The benefit waiver withdrawal could also impact the substantive trade package that India and the US were working on. “That package is now off the shelf since the GSP review was triggered. But there is still a period of 60 days,” said an external affairs ministry official.

GSP provides for non-reciprocal and non-discriminatory benefits extended by developed countries to developing ones. India is the largest beneficiary of the scheme under which 1,700 products out of 3,700 products are covered.

The US had decided to review low or zero tariff imports from India last April following representations by its medical device and dairy industries “but subsequently included numerous other issues on a self-initiated basis,” India said in a statement.

Washington had earlier withdrawn duty benefits worth $75 million from Indian exports of certain musical instruments, leather, textiles, dairy and chemicals in November, based on import ceilings in the scheme to limit duty-free access.

India said it was able to offer a “very meaningful way forward” on the issue of market access for various agriculture and animal husbandry products, relaxation or easing of procedures related to issues like telecom testing, besides conformity assessment and tariff reduction on information and communications technology products.

“In a few instances, specific US requests were not found reasonable and doable at this time by the departments concerned, in light of public welfare concerns reflective of India’s developing country status and its national interest,” India’s commerce department said.

India has explained to the US several times that unconditional access to the dairy market is not feasible on religious grounds but did offer simplified dairy certification procedures to make it less time consuming.

US exports need to be certified that dairy products are derived from animals that have never consumed any feed containing internal organs, blood meal or tissues of ruminant origin, owing to matters of faith. That is non-negotiable, India has told the US.

While New Delhi conveyed the acceptability of US market-access requests related to products like alfalfa hay, cherries and pork, it stated its willingness to cut duties on ICT products on specific items in which there is a clear US interest, as any reduction would almost entirely benefit third countries especially China.

On telecom testing, India was willing to consider discussions for a mutual recognition agreement.

While Trump has repeatedly complained about high tariffs, the government said it “is pertinent that India’s tariffs are within its bound rates under WTO commitments, and are on the average well below these bound rates.”

Bound rates are ceilings on tariffs that countries commit to at the World Trade Organization. India’s trade weighted average tariffs are at 7.6%, which is comparable with the most open developing economies and some developed ones.