Chennai: Ride around city in 2.5 hrs on a train 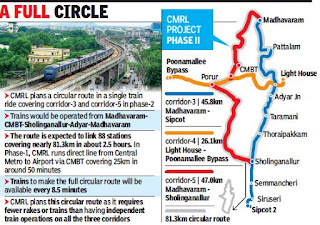 When phase-2 begins operation in another six years, commuters could circle the city touching northern and southern suburbs in about two and a half hours in a single train ride. Chennai Metro Rail Limited has planned a circular route that will take passengers from Madhavaram to Sholinganallur and back via Adyar on the east and CMBT on the west of Chennai, covering 81 km. This circular route will link corridors 3 and 5 and is similar to the direct line operated in phase-1 linking Central Metro to Airport via CMBT across corridors 1 and 2. Work for the construction of 118.9 km phase-2 has begun and is expected to be ready by 2026.

According to officials, the circular route will follow the line from Madhavaram-CMBT-Sholinganallur-Adyar and Madhavaram with seven trains operated every hour at an 8.5-minute frequency.

The detailed project report of phase-2 states this circular train operation, besides catering to the traffic on corridor-3, will also cater to an estimated traffic of 5,171 passengers between Madhavaram to MMBT and an estimated 35,714 passengers from MMBT to Sholinganallur on corridor-5. Since trains will also be operated independently on all the three corridors, by 2055, there will be one train operated every 3.5 minutes between MMBT and Sholinganallur route alone.