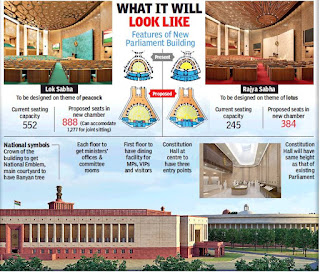 Besides the two Houses, the triangular building will have a Constitution Hall that will exhibit an original Constitution and a digital form for people to read page-by-page. This will be the only portion of the building that will have no storeys. The rest of the complex will have four floors. Each floor will have offices of ministers and committee rooms.

The first floor will have dining space for member of Parliament, VVIPs and visitors. It will also have a central lounge.

Besides being earthquake proof, the new building will be eco-friendly and consume significantly less power. “The project will be completed in time in 2022 and the winter session will be held here,” housing and urban affairs minister Hardeep Singh Puri said.

The government said the new parliament building is a necessity in the 21st century. The statue of Govind Ballabh Pant, currently located between Raisina Road and Red Cross Road, will be shifted to GB Pant Marg as the new building will require more space.

Union housing and urban affairs secretary Durga Shankar Mishra said that all minute details were worked out while planning the building. “The four national symbols will find a place in the building. The National Emblem will be the crown of the building. In the courtyard, we will have a peepal (banyan), which is our national tree,” he added. Officials said the building will have the most modern security and surveillance system. “The security check will be mostly non-intrusive,” said Bimal Patel, the designer of Central Vista redevelopment project. Dholpur and red stone from Rajasthan will be largely used. The digital audio visual system placed in front of every seat will have ‘programmable rules-based microphones’, which will put the Speaker in control of who gets to speak and who doesn’t.

Every MP, minister and political party will get office space here. These buildings will be connected to the parliament complex with a tunnel. “Reports of Sardar Patel Bhavan being demolished are speculative,” said another official.