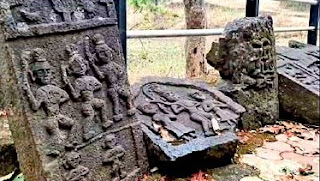 Three stone sculptures dating back to the 6th to 12th century were found while desilting the ancient Jamsar lake in Jawhar taluka, Palghar district, on Friday. The lake was declared a wetland by the village panchayat recently, and work of desilting the 6.6-hectare water body has been underway for a month.

On Friday, workers stumbled upon the sculptures that had images of war heroes and a five-headed cow, said villager Balu Dhakne. Work was halted and villagers informed Jawhar tehsildar Santosh Shinde, who visited the lake on Monday. Shinde said officials from the Archaeological Survey of India were informed. The ASI will be able to throw light on the artefacts, he said, adding that similar sculptures were found in 1986 in the same lake.

Last year, the district administration identified Jamsar as one of the 86 potential wetlands. Jamsar is included in the National Wetland Inventory Atlas, Maharashtra, prepared by Indian Space Research Organisation. The village has urged the state to help conserve the lake as they are not able to restore it themselves. The Mukne dynasty ruled the Jawhar state in the 14th century. It went through several transitions and lasted for over 600 years, till its accession into the Union of India in 1947.