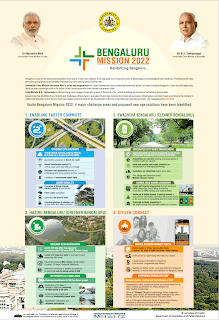 The BS Yediyurappa government rolled out Bengaluru Mission 2022 that aims to revamp city infrastructure over the next two years. “It’s the vision of Prime Minister Narendra Modi to see Bengaluru as one of the best cities in the world. We’ll work to fulfil his wish,’’ he said after launching the blueprint.
The roadmap will focus on five broad areas: easing traffic bottlenecks, making public transport more accessible and affordable, improving lung spaces, connecting people with the city’s art and culture, and providing digitally enabled services.
The government plans to create two new lung spaces on the lines of Cubbon Park by repurposing lands of public sector undertakings NGEF and Mysuru Lamps. The government will establish a culture, heritage and crafts museum at NGEF to showcase the state’s culture. An interactive digital show of the city’s journey into a premier innovation hubs — Itihaas-Bengaluru’s technology history — will be set up at Mysore Lamps Factory.
Two mega tree parks, each of 400 acres, will be developed on the outskirts of the city and turn existing mini-parks at JP Nagar, Turahalli, Kadugodi and Mattikere into popular destinations. The government plans to set up a unified citizens’ connect portal to make services easily accessible. The BBMP’s Sahaya portal will be redesigned as a one-stop platform for grievance redressal.
To reduce traffic bottlenecks, the government plans to develop 12 high-density corridors, stretching up to 190 km, in coordination with the Karnataka Road Development Corporation. An annual maintenance contract would be given for 400km of arterial roads and it will promote shared electric vehicles and ensure operations of suburban rail within the next two years.
The government will refurbish existing waste-processing plants and implement GPS-based monitoring of waste collection and rehabilitate legacy dump sites to ensure efficient waste management. Yediyurappa said funds have been set aside for all the works and they will be completed in a time-bound manner. He asserted that financial distress due to Covid-19 would not get in the way of development.
However, the opposition dubbed it as “old wine in an old bottle”. “The roadmap seems to be a compilation of ongoing works and those in the pipeline. It clearly suggests the government is making attempts to lure urban voters ahead of the BBMP elections,’’ said a Congress functionary.