Mumbai: MMRDA uses lockdown to bring Monorail rakes back from the dead 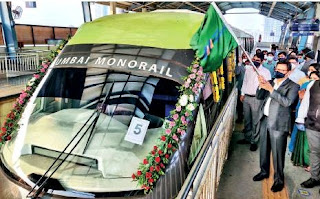 Two Monorail rakes that were taken apart two years ago to reuse their components for an ageing fleet have finally been reassembled. On December 16, one of them was reintroduced on the Chembur-Wadala-Jacob Circle route. Another one, with improved and cushioned seating, will join in the coming months. The engineers from Mumbai Metropolitan Region Development Authority have been reviving these two rakes for more than a year. Currently, the fleet comprises four functional rakes with one on standby at the depot.

Sources said the contractors took a hasty decision of cannibalising old rakes to save money on spare parts for the functional fleet, but then MMRDA ended up struggling to get new parts for the revival of old rakes. While some were imported from Germany and Korea, others were sourced from Hyderabad, Bengaluru and Pune. Officials said local procurement has helped MMRDA save 74 per cent of its estimated cost.

An official said, “We procured specialised springs and auxiliary power supply cables from German companies, while gear boxes and shafts were sourced from Korean companies. Materials for power supply and tyres were sourced from local firms.” He said special tyres for the seventh rake are being manufactured by a Hyderabad-based company. “They are made of hard and not synthetic rubber as in the existing fleet,” he said, adding that procurement and work during the lockdown was not easy. Non-payment by vendors made the repair work more difficult.

Owing to the pandemic, the Monorail operations have been suspended since March 22. However, the maintenance activities have continued during this period.