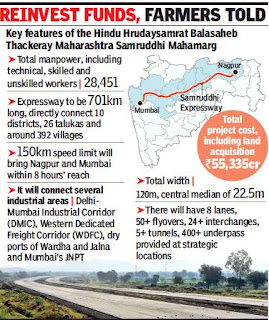 It was a momentous day for the Koltes, comprising three brothers and their families. They were the recipients of the largest payout from the state government—about Rs.23.4 crore—for surrendering 9.5 acres of their 16-acre ancestral agricultural land for the upcoming Mumbai-Nagpur Samruddhi Expressway.

“Our annual income from farming was Rs.3 lakh to Rs.5 lakh a year. The family was emotionally attached to the property but when we started calculating the compensation being offered, we changed our minds,” said Dnyaneshwar (37), a state government employee.

When the 701km road project between the two cities was initiated in 2016-17, largescale protests broke out across the 10 districts on the route. Thousands of farmers objected to the land acquisition and chased away officials in many areas, especially in Nashik and Aurangabad districts. “Samruddhi Murdabad” became a battle cry for the protesters.

However, when the government amended its land acquisition policy by dangling a humungous carrot —five times the market value of the land—the agitation dissipated. “We paid Rs.8,000 crore to acquire 25,000 acres from 34,000 families,” said Radheshyam Mopalwar, vice-chairman and managing director, MSRDC.

“This was the fastest land acquisition in India,” said H V Argunde, deputy collector and administrator for MSRDC in Aurangabad. It was completed within a year and a half. “Any delay would have cost us an additional Rs.5,600 crore a year. Offering a huge compensation package to farmers was the best option,” he said. The project cost is currently pegged at Rs.55,335 crore.

Bhausaheb, one of the three Kolte brothers, spearheaded the agitation in Aurangabad district. “From age15, I have been staying on and living off my land,” the rugged farmer told this correspondent.

“I sat under a mango tree for two hours with Bhausaheb and other villagers to convince them to accept the compensation package. They finally relented,” said Argunde. The Koltes’ land was considered a prime property as it touched the existing Aurangabad-Jalgaon highway.

Bhausaheb, the only cultivator in the Kolte family, grew cotton, bajra, tur, wheat, sugarcane and various vegetables on the land. After he received his share of the hefty compensation (over Rs.7 crore), Bhausaheb did what any son-of-the-soil would do. He purchased an additional three acres of a nearby plot to continue farming. He said he is also building a large bungalow for his family. Raj, his son, is not sitting idle either. He is pursuing an MBA degree.

Ravindra, Bhausaheb’s brother, said the family did not want to impede development. “There were serious differences within the family initially. But everyone relented,” he said. The compensation money has been invested mainly in fixed deposits and building new homes. “Fortunately, there is no income tax on compensation received for surrendering agriculture land for a public project,” said Ravindra Kolte.

Chandrakant Pulkundwar, MSRDC’s joint MD, said the corporation hired 320 communicators to guide and counsel farmers how to reinvest their money. “We also started a skill development programme for their children to make them employable,” he said.

“An entire generation of farmers suffered because of the previous land acquisition policies. Compensation was meagre and they spent decades in litigation. This had to end,” said Argunde. “The new land acquisition law in 2013 was a paradigm shift, offering farmers four times the market value of the land. However, in the case of the Samruddhi Expressway, the state government went even further and hiked it to five times in order to speed up the project,” he added.

Meanwhile, the 502km stretch of the expressway between Nagpur and Shirdi is expected to be completed by mid-2021. “We want to inaugurate this stretch on May 1,’’ said Mopalwar.

Last week, chief minister Uddhav Thackeray said the entire highway would be ready for traffic from Nagpur to Mumbai by next year. “Efforts are being made to complete the other road works in the state expeditiously,” said Thackeray. More than 28,000 workers are employed on site to complete the project.