2025: Infusing Life Back Into Yamuna 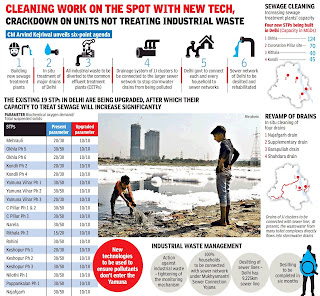 Determined to clean the Yamuna before February 2025, Delhi government has started work on a war-footing to ensure that the river gets its life back. Various measures being taken up include enhancing the sewage treatment capacity, monitoring creation and treatment of industrial waste and ensuring processing of domestic sewage before the treated water flows in the Yamuna.

Four new sewage treatment plants are being built — Okhla facility with a capacity of 124 million gallons a day, Coronation Pillar site 70MGD, Rithala 40MGDs and Kondli plant, 45MGDs. The existing 19 STPs are being upgraded to boost their treating capacity.

The government is also going for in-situ treating of sewage in the Najafgarh drain, Supplementary drain, Barapullah drain and Shahdara drain. “The running water is being cleaned inside the drain itself instead of in an STP,” explained a government official.

The government has directed the industries department to act against units that do not channel their waste through a pipeline going to a treatment plant. “If they do not put the wastewater in treatment plant drains, the units will be shut down,” warned the government. Industrial units that discharge water into the sewers without treatment will also be closed down. There are many manufacturers, such as of plastic pellets, that dump waste into sewer lines. Improper disposal of waste in this manner will also attract strict punishment, the government stated.

The community toilet complexes in JJ clusters across the capital are connected to stormwater drains and not to the sewage network. All wastewater in such clusters flows into the the stormwater drains too. On Thursday, Delhi government stated, “It has been decided that even the smallest drain coming out of JJ clusters will be connected to the nearby sewer line so that wastewater can be treated at the STP. The target is to get sewer lines for 1,799 unauthorised colonies in Delhi by 2024.”

The plan also wants to prevent household toilet waste from going into sewage drains. “East Delhi now has provision for connecting all households to a sewage network. Yet, there are many small and big waste-carrying drains, whose contents are dumped into the stormwater drains. After this, that water then flows into the Yamuna through the bigger drains,” noted the government statement.

This filthy water flows down the big drains spreading a foul smell across large areas, creating a breeding ground for flies and mosquitoes and contaminating the groundwater before eventually polluting the Yamuna.

Delhi has a sewer network that is 9,225km long, and Delhi has started the process to unclog all of them. “Wastewater from households contains silt which continually builds up inside the sewer line,” said a government official. “If the pipeline gets choked anywhere along its length, the dirty water flowing in it is blocked and overflows onto the roads and again eventually reaches the river through the stormwater and drains.

The target before the government in the next six months is to clear the sewer lines of accumulated silt. “Any area in which the sewer line is found to be clogged from 10% to 50% will be cleaned and desilted. After this, the wastewater is more likely to reach the STPs for treatment,” the government stated.