Jewar Will Have Airport, Be Business Hub, Jobs Centre: PM 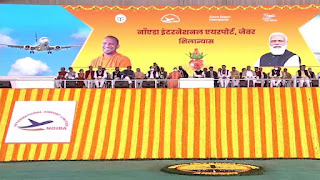 Just weeks before the announcement of the Assembly elections in Uttar Pradesh, Prime Minister Narendra Modi laid the foundation stone of the Noida International Airport even as the Yogi Adityanath government turned the event virtually into a political rally to woo the voters from the western part of UP.

In his address, the Prime Minister asserted that the airport project will usher in an economic transformation of west UP and benefit crores of people of the region. He said it will lead to creation of one lakh jobs, encourage exports, boost tourism, and improve connectivity through road, rail and metro to other places.

The international airport project was envisaged several years ago but did not see the light of day due to various reasons. The Modi government aims to complete the first phase of the project by 2024 with two functioning runways. This phase of the greenfield airport will be built at a cost of ₹30,000 crore. Later, the airport will have five more runways along with several modern facilities and hubs. Over 20 lakh passengers are expected to use it initially.

UP has three international airports — Lucknow, Varanasi and Kushinagar — and two more — Ayodhya and Jewar— will come up in the next few years.

Modi took digs at the Samajwadi Party and previous governments of Uttar Pradesh and at the Centre, saying airport project was delayed for years on flimsy pretexts. The previous regime had even written to the Centre to scrap it, he added.

Modi also hit out at critics who have maintained that the project was hanging for the last four and a half years and is being initiated only before the polls. “We could have laid the foundation stone of the airport in 2017 itself. People would also have felt there is nothing amiss in doing so. During earlier governments, infra projects were announced without any plan for funds and roadmap for implementation...,” Modi said. 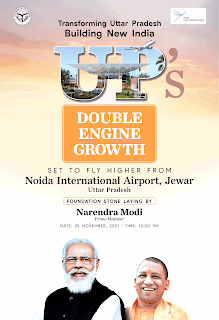 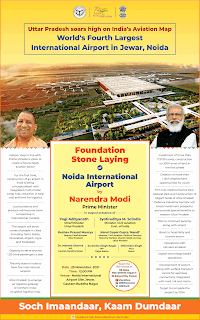