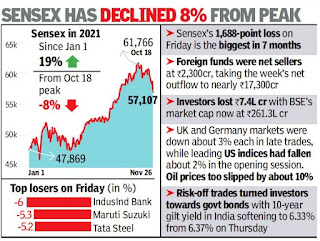 India's stock indices tanked 3%, tracking the slump in Asian markets as the detection of a new coronavirus strain sparked worry that it will scuttle global economic recovery.

While the likely impact of the new variant isn’t clear, investors are concerned about its spread and the prospect of renewed lockdowns across the globe. Many countries are tightening travel after the discovery of the new Covid-19 variant in South Africa earlier this week. Reports suggested that the new variant could be more transmissible.

In India, too, investors are cautious because wholesale inflation is now hovering in the double-digit region for the seventh consecutive month. The rise in crude prices to multi-year-high levels till a week ago was also bothering investors.

The day’s slide in the market came on the back of strong selling by foreign funds with the net outflow for the day at Rs 2,300 crore, which took the week’s net figure to nearly Rs 17,300 crore. The selloff also left investors poorer by Rs 4.7 lakh crore with BSE’s market capitalisation at Rs 261.3 lakh crore. Since sensex’s all-time intraday high at over 62k on October 19 this year, investors have lost about Rs 16 lakh crore.

The sell-off also triggered fears among investors which was reflected in a 25% spike in India VIX, the volatility index that’s also called a measure of fear on the street. The spike in VIX to above its multi-month-high level signals the dominance of bears in the market, said Siddhartha Khemka, head, retail research, Motilal Oswal Financial Services.

Indian investors turned to less risky assets like government bonds. As a result, the 10-year gilt yield softened to 6.33% from 6.37% on Thursday.

The global selloff in risky assets, also called risk-off trades, led to a 2.5% slide in Nikkei in Japan on Friday morning while in the evening FTSE in the UK and Dax in Germany were down around 3.5%. And in early trades, the leading US indices were down by about 2% each. Riskoff trades also led to a 7% slide in Bitcoin. On the other hand, investors’ rush to less risky assets led to a nearly 1% rally in gold prices while US 10-bond yields were down 9% to below the 1.5% mark.