A Bullet Train From Delhi-Agra ? 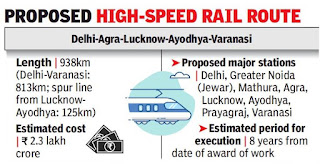 The Delhi-Varanasi High Speed Rail or bullet train project would be 958 km long, including a 123km spur connecting Lucknow with Ayodhya, according to the detailed project report. And if all goes as per the government plan, there would be one bullet train running at top speed of 300 kmph every hour from Delhi to Agra and Agra to Delhi by 2029-30.

The entire corridor will be a mix of elevated stretches and tunnels considering the corridor safety requirement. It would have 12 stations and would link all major religious places including Mathura, Ayodhya, Prayagraj and Varanasi. There would be an underground station at Jewar airport as well. The total project cost is estimated at Rs 2.28 lakh crore and getting finance would be crucial for execution of the mammoth project.

Currently, it takes around 11-12 hours to reach Varanasi from Delhi by train. The proposed bullet train would reduce this journey time to barely three hours. The high speed rail connectivity to Varanasi, the heart of eastern Uttar Pradesh, is crucial considering that the current regime has is focusing on changing the profile of Purvanchal by creating world class infrastructure.

This move also gains importance as the government makes efforts to place Ayodhya on the world tourism map and high speed connectivity will be a catalyst to bring tourists to the holy city.