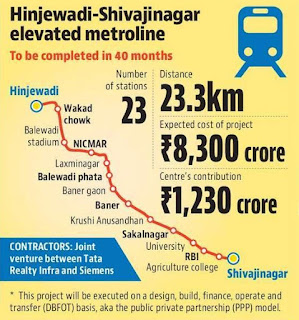 The project, coming up on the public-private partnership model, will have to be completed by the concessionaire, Tata-Siemens, in the next three years and four months.

PMRDA commissioner Suhas Diwase said that the appointed date was announced on Thursday and the letter was submitted to deputy chief minister Ajit Pawar and the urban development department secretary.

“The work will begin and be completed in three years and four months from this commencement date. The commencement date was announced as PMRDA has completed all the required land acquisition process and handed the land over to the concessionaire,” he said.

Now that the commencement date is announced, work will begin simultaneously at eight locations along the 23.3km route. An official close to the development said pre-engineering work and geotechnical investigation have been completed, while 70% of the work sites have been barricaded; soil testing, structural design, and work at the casting yard have also begun The corridor will connect Maan, near the Hinjewadi IT park, to the Civil Court in Shivajinagar. Officials said it would take 40 minutes to complete the end-to-end commute on the route, which will comprise 23 stations. The concessionaire will execute the project on a design, build, finance, operate and transfer basis for an initial concession period of 35 years. The route will have 23 elevated stations and the project is estimated to cost a little over Rs 8,000 crore.

The Metro project is coming up according to the norms of the Centre’s new Metro policy, through the PPP model.

A few days ago, the Centre had pledged Rs.1,230 crore as part of the viability gap funding. About 98% of the land was acquired, paving way for the announcement of the date of commencement, said officials.

The double-decker flyover at the University chowk, which is coming up in place of the older University flyover, too got the green signal; the transport authority had suggested changes for traffic movement to make way for construction work.

The barricading work is in progress in Hinjewadi Phase-3 and on Ganeshkhind Road, and the traffic department will be issuing orders for traffic management.

This is the third Metro corridor coming up in Pune and Pimpri Chinchwad. The other two routes — the fully elevated 14km-long Vanaz Ramwadi corridor and the 16km Pimpri-Swargate corridor, which will be elevated from Pimpri to Range Hills and underground thereafter — are being developed by the MahaMetro.

The 4.5km extension of the Metro route from Pimpri to Nigdi is pending final approval from the Union government.

The Maharashtra Metro Rail Corporation Limited (MahaMetro) said work can get under way if all approvals are received in the next few months.

Three stations are proposed on the extension to Nigdi. The proposal sent to the Union government was sent back to the state government for some clarifications. A revised proposal was resent to the Centre. Officials from MahaMetro said, “Since it is a natural extension, we are looking to take up the work in the first phase. The entire route will be elevated. We will draw up a plan to float tenders and finalize other details once the final nod is received.”

Officials said that they were in communication with the state government and PCMC in this regard. The extension will cost Rs.947 crore. The expenses will be shared by the Union government, the state and PCMC.