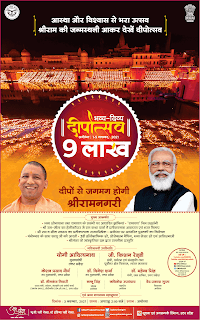 Deepotsav will hog limelight otherwise too because of the sheer number of diyas that would be lit on Wednesday.

Around 9 lakh diyas will be lit this time breaking the last year’s record of 6 lakh earthen lamps. Officials in Ayodhya said a team from the Guinness Book of World Records has already reached the temple town. As many as 12,000 volunteers have been pressed into service to light diyas. Each volunteer has been assigned the task of lighting 75 diyas.

The temple town became the hub of activities after the Supreme Court paved way for the construction of Ram Temple in Ayodhya.

On August 5, 2020, Prime Minister Narendra Modi laid the foundation stone for the construction of Ram temple at the spot which remained a disputed site for over five centuries. The BJP, which had been promising the construction of a grand Ram Temple in Ayodhya in all its manifestos, has been claiming it to be a big victory. However, months before the UP polls, opposition parties are finding it difficult to stay away from Hindutva agenda.

During his recent visit to Lucknow, Union home minister Amit Shah had strongly propped up the Hindutva agenda by claiming that the BJP ended the centuries’ old dispute around Ram temple in Ayodhya and Yogi Adityanath would carry forward the party’s agenda.