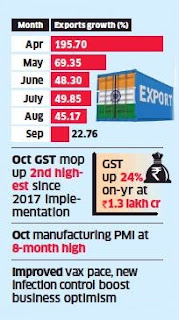 India’s merchandise exports increased for the eleventh consecutive month in October, growing 42.33% on year to $35.47 billion, led by engineering goods, petroleum products and gems and jewellery. Government data also showed a 62.48% rise in imports to $55.37 billion, leaving a trade deficit of $19.9 billion compared with $9.15 billion a year earlier. In September, the trade gap was $22.59 billion, a 14-year high.

“This (data) has not only added positive sentiment for exports but has also further enthused the exporters to perform with much more vigour and zeal, thereby achieving the $400 billion merchandise export target in the current fiscal,” Federation of Indian Export Organisations president A Sakthivel said.

Exports of engineering goods rose 50.7%, and those of gems and jewellery grew 44.2%.

On a month-on-month basis, October’s merchandise exports were almost 5% higher than $33.8 billion in the trailing month. Gold imports more than doubled to $5.1 billion last month.

Economic recovery, increased compliance and an upward trend in returns filed leading to timely payment of taxes all aided GST collections last month. The government’s action against tax evaders to plug revenue leaks also helped. The October collection is 24% higher on-year and 36% more compared with two years earlier. This was the fourth straight month when the revenue crossed the ₹1 lakh-crore mark — it has crossed the mark in six of the first seven months this fiscal year.

“The department has worked hard on compliances too, which has also contributed to the rise. We have sent out a clear message that without complying, you will not be able to carry out business … Such persons will be out of the system,” revenue secretary Tarun Bajaj said.