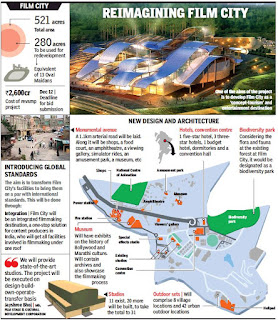 Film City, Goregaon, is set for a major revamp. The state aims to not only make it a one-stop solution for all cinematic requirements, but also develop it as a preferred site for tourists. Nearly seven years after Film City’s redevelopment plan was announced, the government has floated global tenders for the Rs.2,600-crore project.

Film City is spread over 521 acres, over half of which will be used for redevelopment. Private studios and institutes that have already been allotted land there are not part of the project. Officials said they will start applying for permissions, including environmental clearances, once a bidder is selected and the design finalized.

Tenders were floated July-end, with December 12 as the last date for submission of bids, said an official from the Maharashtra Film Stage & Cultural Development Corporation, which is overseeing the project. “A key condition for the bidder is to ensure that trees are untouched, and that green cover is not reduced,” said an official.

The aim of the revamp is to make everything from pre-production to shooting to post-production available under one roof. As for developing tourism, an official said, “There is a huge demand for cine tourism in Mumbai, the home of Bollywood. People want to see shoots, meet stars and experience the history of cinema. We are trying to create all these experiences at Film City.”

Film City, Goregaon, on an average hosts 60 shoots every day and earns Rs.65 crore in revenue annually, figures the government hopes will go up considerably after the revamp. Production houses that have used Film City say a lot can be done there.