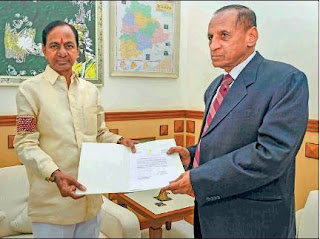 Chandrashekar Rao, president of TRS, also announced a list of candidates for 105 out of 119 assembly constituencies, hoping to have the polls by November-end.

Addressing media immediately after the governor accepted his cabinet’s decision and advised him to head the caretaker government, Rao, popularly known as KCR, said his party would go solo in the polls to win at least 100 seats comfortably. He ruled out any alliance with BJP, and said TRS will remain a secular party come what may.

He said TRS will have a friendly relation with AIMIM in Telangana which had extended support to the TRS government during early days of Telangana state against attempts to destabilise the government.

Rao ended weeks-long suspense over dissolving of the state assembly on Thursday afternoon. He attributed the decision to opposition parties’ unfounded corruption allegations that, he claimed, were weakening the morale of the administration. The move will help curb growing ‘political fragility’ in Telangana, he said.

Rao said his colleagues and bureaucrats held discussions with the CEC’s office and hoped the poll notification would come by October first week and elections would be held in November for announcing results in December first week.

KCR is said to be against holding assembly elections along with the Lok Sabha elections, fearing adverse effects owing to national-level political alignments. In normal course, both the elections would have taken place together around April-May 2019.