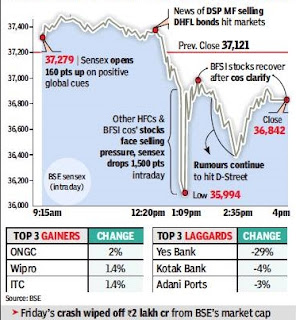 Bringing back the horrors of flash crashes, the sensex lost 1,500 points — or 4% — within an hour and a half during Friday’s mid-session, and then recovered as quickly to finally settle with a 280-point loss at 36,842. This was the BSE benchmark’s first sub-37k close in nearly two months.

The shock movement in the index was mainly due to a 29% crash in Yes Bank’s stock, which tanked after the RBI declined to extend the term of its incumbent managing director Rana Kapoor beyond January next year.

The selling soon spread to stocks of non-banking finance companies, lenders and other financial entities. As a result, the BSE’s banking index closed 3.1% lower, while the finance index was down 2.2%.

Top officials at housing finance companies and other financial entities clarified that there were no fundamental changes to the sector or any particular company that warranted a crash. Indiabulls Housing Finance VC & MD Gagan Banga said that the company followed a very strict liquidity principle and “we pay a lot of negative carry through the year for such times”. Negative carry is the process of paying higher interest rate on borrowings and getting lower rates on its deposits.

“Indiabulls Housing has over Rs.23,000 crore of cash and cash equivalents as of this (Friday) morning, which cover more than 125% of our six-month liabilities. We have continued to be engaged with bond markets and have done issuances of over Rs.5,000 crore over the last 10 days,” he said. ICRA, a leading credit rating agency, also reaffirmed its AAA rating for Indiabulls Housing Finance.

Incidentally, an internal report by the RBI’s department of banking supervision recently said that a vast majority of the HFCs demonstrated significantly better asset quality and performance metrics in relation to the NBFC sector. Industry players said that this reinforces the fact that, despite the strong growth that HFCs have shown over the last few years, their risk containment measures have not been diluted. Interestingly, the slide came despite both foreign and domestic funds turning net buyers with inflows of Rs.761 crore and Rs.497 crore, respectively.