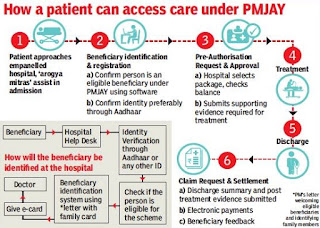 Calling the scheme a “game changer”, Modi said the plan will change the healthcare scenario in India and will form a model for other countries to follow and replicate. “A government scheme on such a grand scale is not being carried out anywhere in the world. Even the last person standing in the queue should get better health facility. More than 50 crore people will get insurance up to Rs.5 lakh. This is the world’s first such scheme,” Modi said while addressing an enthusiastic crowd in Ranchi’s Prabhat Tara Maidan.

“Some call it Ayushman Bharat, some call it Modicare, but it is a scheme to serve the poor,” the PM said, evoking folk hero Birsa Munda.

Launching a veiled attack on the former UPA government, Modi alleged that health of the poor was ignored for the past 60 years due to vote bank politics. “Those who chant the name of poor, had they done something concrete for them 50 years ago, the situation would have been different. I have lived in poverty and realise the pain of a poor man,” he said.