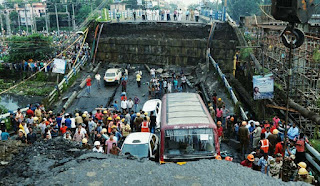 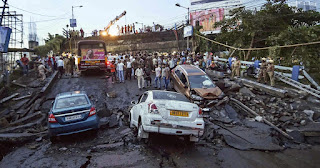 One person died while many more were injured when a flyover collapsed in the busy Majerhat area of Kolkata, sending vehicles crashing down and leaving many trapped.

West Bengal Chief Minister Mamata Banerjee, who has ordered a high-level probe, said from Darjeeling that the casualty figure may go up.

The bridge, which runs over the Majerhat railway station, connects Behala’s Taratala and Alipore. Police and disaster management teams rushed to the spot to rescue those trapped under the collapsed bridge.

While police confirmed the death of a biker, Soumen Bag, fire brigade personnel engaged in the rescue work said 25 injured were pulled out from the rubble. Rescue work was still going on till late into the night. NDRF DG Sanjay Kumar said earthmovers were being used for rescue operations.

While some reports said that the bridge is 40 years old, former PWD minister Kshiti Goswami claimed that it was built more than 100 years back.

In March 2016, a flyover had collapsed on a crowded street in Posta near Burrabazar, killing 27 people and crushing cars and other vehicles.