Indians are upbeat about the future 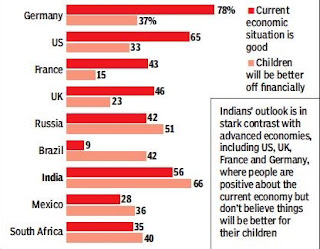 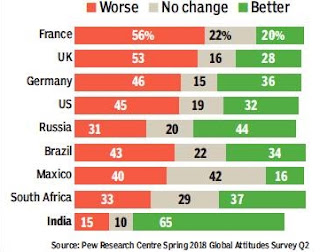 Ten years after the 2008 financial crisis, most major economies have recovered and the public mood has improved. However, despite the recovery, a Pew Research Centre survey found people in Western countries think the coming generations will be worse off than their parents. But Indians disagree, reflecting confidence in the economy and the outlook for the future…Indians think their kids will be better off

Indians are positive about the economy at present and also confident that their children will have a better future. However, while 56% Indians in 2018 were upbeat about the economic situation, it is a 27% drop from the 83% in 2017 who said the present financial situation is good

In many advanced economies, strong economic performance is not enough to convince the public of a bright future for their kids...Few Indians think the past was better

While in many advanced economies, despite a big uptick in growth, people believed the past was better than the present, respondents in India mostly think that the average person on the street is better off today than 20 years back

Asked if the financial situation of average people in their country is better than 20 years ago, most people in advanced economies disagree...