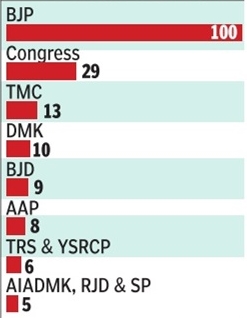 The governing BJP has for the first time touched the 100-mark in Rajya Sabha and become the first party to cross the threshold in what marks yet another milestone in the party’s relentless pursuit of dominance.

Although the party’s tally will once again drop below 100 with four of its members, who were nominated to the Upper House, retiring in three weeks, the party has moved within striking distance of its goal of being the first non-Congress party to acquire majority in both Houses.

The path from now on, however, will not be linear. One more nominated MP will retire on May 3. At present, nine of the 12 nominated members are part of BJP, taking its tally to 100. However, it can recoup its losses by June-July when 53 more seats will fall vacant. Twenty MPs would retire in June and another 33 in July. As 11 of the vacancies will be from UP, BJP would be able to retain its strength.