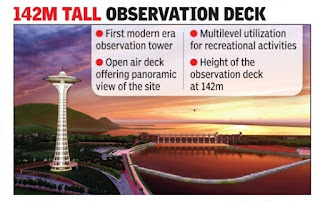 After the world’s tallest statue – the Statue of Unity – near the Narmada dam, yet another modern world class wonder will soon take shape at the Dharoi dam in north Gujarat. Following a suggestion by Prime Minister Modi, the government of Gujarat has drawn up a detailed plan to set up a space observatory-cum-recreational facility at Dharoi, a few kilometres from PM Modi’s hometown Vadnagar.

Initial estimates suggest the project, which has been sent to the Prime Minister’s Office for approval, will cost Rs. 1,041 crore and will be completed in three years.

The Gujarat government has given in-principle approval to the ‘Development of Dharoi dam region as a world class sustainable tourist/pilgrimage destination’ project. The Dharoi dam project, together with Vadnagar’s heritage and cultural tourism and Ambaji temple’s religious tourism, will serve as an integrated tourism circuit for national and overseas tourists.

The 140-metre tower will be India’s highest observatory for astro-tourism with a telescope gallery, viewing points and an astronomical observatory. Besides, the tower will have an open-to-sky viewing deck and also a semi-covered seating zone and a semi-covered interpretation zone towards the top end of the tower.

The project will have a visitor centre, an amphitheatre with laser show, a water sports zone, an island adventure zone, and other activities.

A part from the iconic observatory, the Dharoi dam region project will have a visitor centre, an amphitheatre with laser show, a water sports zone, an island adventure zone, a wellness and naturopathy retreat, a polo club and resort and a convention centre with an events ground.
A key source close to the development said, “After clearance from the CMO (chief minister’s office), the project master plan has now been sent for the PMO’s consideration. Once approved, the state government will launch the process of implementing the project which has been envisioned by PM Modi himself.”
Sources said that the state government is already developing Vadnagar as a heritage city with a museum and other attractions and the Ambaji temple is a world famous religious pilgrimage site. “Dharoi will serve as the anchor tourism site for all other attractions located in the vicinity,” sources said. The seaplane terminal at the Dharoi dam will also be set up under the project. Sources said a fixed and floating jetty will be set up with several amenities.