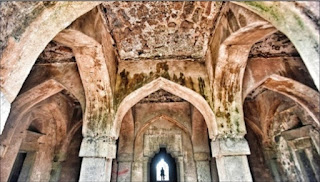 If the Delhi government’s Malcha Mahal restoration project goes to plan, work should begin in 4-5 months and it may take a few years to restore the hunting lodge to its old glory.

There is a lot of work that needs to be done, the official said, as only the main hall and a wall-like structure is currently visible now. The floors and the pavilions at the four corners, brackets and parapets are broken and need to be fixed.

The thick foliage around the structure has caused a lot of damage too. It will have to be removed while the trees around it require pruning to expose the hidden edifices.

Set in the midst of a teeming city, Malcha Mahal has largely remained off-limits for close to four decades. In May 1985, the central government offered the structure to a woman who called herself Begum Wilayat Mahal, royalty from Awadh, and camped in the first-class waiting room at New Delhi railway station for nearly a decade.

She shifted to the lodge, which had no electricity or running water, along with her son and daughter who called themselves prince Ali Raza and princess Sakina. With them came a few servants and 11 dogs.

While Wilayat Mahal died in 1992, allegedly after swallowing crushed diamonds, Sakina passed away a few years later. Raza, the last royal occupant who lived as a recluse and rarely met anyone, died a pauper in September 2017.

Officials said there was a plan initially to carry out excavation at the site, as it was believed that there could be other structures too in the vicinity. “It will be up to the agency that we hire to carry out a detailed study and suggest what is required to be done,” said an official.