BoJo’s tryst with the Mahatma in Gujarat 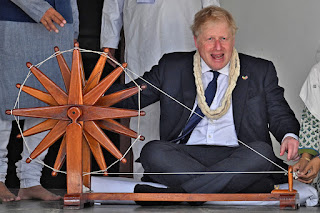 History came full circle when UK Prime Minister Boris Johnson started his two-day India tour by offering his respects to Mahatma Gandhi at Sabarmati Ashram in Ahmedabad. It was the same ashram from where Bapu had embarked on the historic Dandi March, one of the biggest landmarks in India's freedom struggle against British rule.

Incidentally, April 21 also marked the century of the great trial of 1922 in which the Father of the Nation was tried in an Ahmedabad court under sedition charge for causing disaffection against the colonial government.

Johnson landed at the Ahmedabad international airport in the morning and went straight to the ashram.

The Sabarmati Ashram authorities requested UK PM Boris Johnson to give access to information on Mahatma Gandhi amassed by British authorities during India's freedom struggle in terms of official documents and newspaper clippings for Gandhi Heritage Portal, the biggest repository on Bapu’s works.

The British PM garlanded the idol of Mahatma Gandhi in the compound, and paid a floral tribute. He also tried his hand at the charkha at Hriday Kunj, the hut where Gandhi lived.

“It is an immense privilege to come to the ashram of this extraordinary man, and to understand how he mobilized such simple principles of truth and non-violence to change the world for the better,” Johnson wrote in the visitors’ book.

Upon arrival in Ahmedabad, Johnson was given a rousing welcome in Indian PM Narendra Modi's home state.

The British PM then spared half an hour of his time at the Gujarat Biotechnology University near GIFT City campus in Gandhinagar. GBU had collaborated with the University of Edinburgh in the UK last year. PM Johnson also interacted with researchers at the GBU laboratory.

Speaking about his Gujarat visit, the British PM said: “It is great to be in Gujarat, which is an extraordinary place. As you know, we have a huge Gujarati community in the UK which incarnates a living bridge between India and the UK.”

There are an estimated 6 lakh Gujaratis settled in the UK. Later, Johnson visited the BAPS Akshardham Temple in Gandhinagar before departing for Delhi late evening.