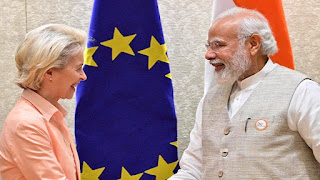 EU’s partnership with India on solar power and green hydrogen is critical as it accelerates efforts to diversify away from fossil fuels and invest heavily in clean renewable energy because of Russia’s aggression against Ukraine, European Commission president Ursula von der Leyen told Prime Minister Narendra Modi on Monday.

EU has paid Russia 35 billion Euros for energy since Russia launched its special military operation in Ukraine as several countries remain reluctant to cut down imports from Russia in a jiffy. Under pressure to not accelerate its “minuscule” oil imports from Russia, India has repeatedly said that it is Europe’s energy imports from Russia that’s still increasing.

The two leaders agreed that as large and vibrant democratic societies, India and Europe share “similar values and a commonality of perspectives on many global issues”. “They reviewed the progress in the India-EU strategic partnership, including the forthcoming recommencement of negotiations on a free trade agreement and investment agreement,” said the government in a statement, adding they discussed possibilities of collaboration between India and the EU in areas like green hydrogen.

While she publicly at least didn’t ask India to review its position on Russia, addressing the Raisina Dialogue later, where she was the chief guest, von der Leyen urged all members of the international community to support EU’s efforts for lasting peace in the form of sanctions.

Like the US and others in the West, von der Leyen sought to play on India’s fears of a Russia-China axis as she spoke about the two countries forging a seemingly unrestrained pact. She said what happens in Ukraine will have an impact on Indo-Pacific region.