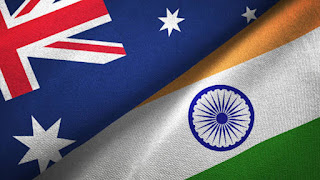 India and Australia on Saturday signed a trade agreement that will provide duty-free or concessional tariff access to 85-90% of products from Down Under, including coal, LNG, wine and certain varieties of cotton and almonds. In return, Australia has decided to reduce or do away with import duties on allits products over the next few years, starting with an initial coverage of around 96% items as soon as the deal is implemented.

The agreement — which comes just ahead of elections in Australia and months after Canberra signalled its growing unease with China — was described as a “watershed moment” by Prime Minister Narendra Modi. “On the basis of this agreement, together, we will be able to increase the resilience of supply chains, and also contribute to the stability of the Indo-Pacific region,” he said.

Australia has agreed to keep dairy products, wheat, chickpeas and apple out of the mix under the Enhanced Cooperation and Trade Agreement, which will come into force after its ratification by its Parliament, which could take four-five months.

With concessions in sectors such as pharmaceuticals, textiles, leather, jewellery and engineering goods, commerce and industry minister Piyush Goyal is hoping that it will double bilateral trade to over $50 billion in five years and create around a million jobs. He said that concessions in raw materials and intermediaries such as alumina, gas and coal will help lower costs for Indian manufacturers and make them more competitive in the global market. Goyal said that zero-duty coal imports were allowed from countries such as Indonesia and added that domestic industry had fully backed concessions on wine where the threshold had been set at $5 a bottle. Besides, he said that the move could result in some investments in the sector apart from technical collaboration.

The minister said the agreement will help Indian pharma companies get regulatory approvals faster in Australia, seen as a market with one of the toughest clearance mechanisms.

While India and Australia had been negotiating a trade deal for a decade, it was stuck as New Delhi was unwilling to offer any concessions for sensitive sectors such as dairy and agriculture. Then, came the negotiations for RCEP, where India opted out due to China’s presence, finally culminating in the ECTA after negotiations began in September.

It comes weeks after India signed a similar treaty with UAE, signalling its intent to push exports, which for the first time topped the $400 billion-mark last fiscal. Agreements with the UK, Canada and Israel are in the works.

Goyal and his Australian counterpart Dan Tehan hope to convert the deal into a comprehensive agreement.