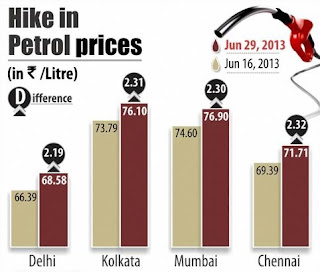 State-run fuel retailers have decided to raise the price of petrol by Rs 1.82 a litre, excluding state taxes, to pass on the impact of the falling rupee and the fuel’s rising price in international trading hubs.
This is the third hike this month and the new prices would be effective from Friday midnight. The actual raise at petrol pumps would be higher due to incremental increase in state levies. In Delhi, petrol will now cost Rs 68.58 a litre instead of Rs 66.39. Sources said retailers are set to raise diesel prices by 40-50 paise a litre early next week.