Mumbai on a cruise 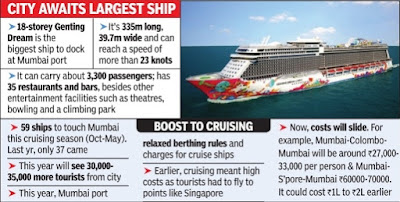 With changes in berthing rules at Mumbai port, this cruising season from October to May will be a happening one for the city . Against 37 ships last year, 59 cruises have confirmed arrival this year. The high point will be when the 18-storey `Genting Dream' sails in on its maiden voyage on October 29. The ship, the largest civilian vessel to dock at Mumbai port, will sail onward to Colombo and Singapore. Around 3,000 passengers from Mumbai and across India are expected to board it.
In a move to convert a chunk of Mumbai Port Trust's (MbPT) operations towards cruise tourism, the port authorities recently removed the 24-hour limit on berthing of cruise ships at the Mumbai International Cruise Terminal. The “ousting“ priority or berthing charges have also been removed. Cargo operations are being shifted to two new berths from the main terminal to make way for the tourist vessels.
Azamara Journey , Voyager, Costa Luminosa, AidaBella, Silver Cloud, Norwegian Star, etc are some of the leading cruise ships that would be taking passengers from Mumbai on international voyages, added Bhatia.
The last major cruising season from Mumbai was in 2006-7 with the Superstar Libra.